Amid changing gaming legislation, Sweden is taking a closer look at the AML laws in the country and whether operators have been living up to their end of the deal. Casino Cosmopol, apparently, hasn’t.

Land-based operator Casino Cosmopol, owned by the state’s Svenska Spel, the first iGaming entity in Sweden that will be officially licensed under the country’s newly-introduced legal changes affecting the iGaming sector, has been fined a hefty $881,000 for failing to implement and uphold mandatory anti-money laundering standards.

The country’s regulator, the Lotteriinspektionen, broke the news on Tuesday, November 27, outlining the failure of Casino Cosmopol to meet the required standards that guarantee customer safety and prove the origin of the funds used at the brand’s casino properties. The official statement accused Cosmopol of “failing in its efforts to counter money laundering and terrorist financing in all areas investigated.”

Lotteriinspektionen had taken a hard look at Casino Cosmopol, identifying “systemic deficiencies” with the offer of the casino, which may call for a complete overhaul, which could be costly and demanding. The implications for the revenue of the casino could be equally dire.

Sweden’s regulator also expressed concerns that the facilities of the casino may have been used for the purposes of money laundering, with the brand operating properties in Stockholm, Gothenburg, Malmö, and Sundsvall. With the casino market in the country expanding, Cosmopol benefits from its growing footprint. But to hold on to growth, the casino will need to toe the regulatory line.

Reading the Case in Full

Fleshing out details about the case, Lotteriinspektionen pointed out to numerous failings affecting proper & accurate documentation as well as lack of measures in the cases of dubious transactions. In simple words, Casino Cosmopol has not denied any money transfers on suspicions that the origin of the funds may be illegal as no comprehensive checks have been carried out.

The brand has been cutting shortcuts insofar as slots are concerned, too, the regulator has found out. Unlike its table games, where human supervisors are assigned to monitor for suspicious or worrying gaming behavior, the slots have been left unmonitored.

Cosmopol replied that this was because only estimated 0.3% of their customer base were prone to worrying gambling addiction practices, but this assessment was immediately disputed by the watchdog. Similarly, Lotteriinspektionen argued that there were problems with accurately gauging the casino’s player base in terms of customers that are more likely to be linked to illegal money exchanges and attempts to launder funds.

For example, a customer who has been registered with the financial regulators of the country for alleged money-laundering was considered a low-risk gamer at Casino Cosmopol, highlighting the discrepancy between the practices touted by the casino and the actual measures undertaken to curb money-laundering and identifying problematic gambling behavior.

With Sweden moving towards a fully-regulated market come January 1, 2019, Casino Cosmopol will need to carry out a major overhaul of its activities to be compliant with the newly-established regulations. Lotteriinspektionen stated that the brand is indeed applying for a license, but to be given a consideration, the casino will need to see to its AML practices.

The news did not go unnoticed by the company, too, with CEO Per Jaldung acknowledging the problems and stating that Cosmopol would continue to bolster its offer in compliance with Swedish law. Mr. Jaldung said that Cosmopol is now aware of the changes that need to be applied to the AML policies and they will be enacted as a “highest priority” task.

Meanwhile, the parent entity, Svenska Spell, announced earlier this month that the company will intensify its efforts in clamping down on match-fixing, by seeking to collaborate with the country’s sporting bodies and police officials. 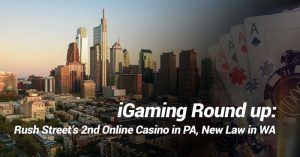 Rush Street Launches Second Online Casino in Pennsylvania Last week was important for Rush Street Interactive (RSI), a subsidiary of Rush Street Gaming operating several online casinos across the United States, with the company launching its second iGaming portal in Pennsylvania. As of January 30, 2020, RSI officially operates the BetRivers casino and sportsbook in […]