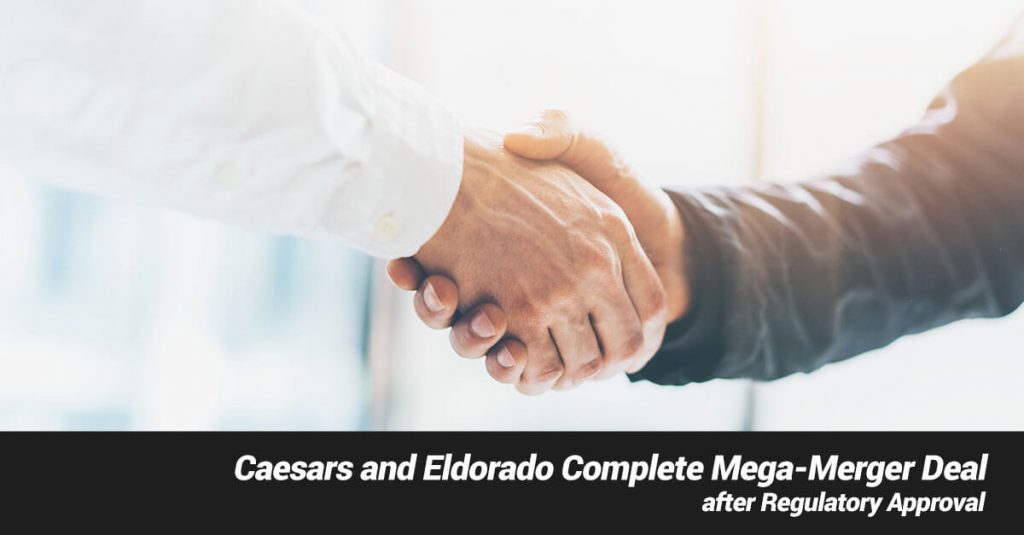 Eldorado Resorts has completed the acquisition of Caesars Entertainment Corporation, sealing the largest deal in the history of iGaming. The amount total of the deal will cost Eldorado $17.3 billion, $7.2 billion of which will be paid in cash and the rest paid in 77 million Eldorado shares.

The mega-merger was subject to multiple approvals from the respective gaming authorities in 15 US states, and not least New Jersey, Illinois, Pennsylvania, California, Iowa, and Mississippi, and federal watchdogs.

Commenting on the merger, Tom Reeg, Caesars Entertainment chief executive had this to add:

“We are pleased to have completed this transformative merger, thus making us the premier leader in gaming and hospitality. We look forward to executing on the numerous opportunities ahead to create value for all stakeholders.”

However, Eldorado and Caesars will have to jump some last-minute hoops, including the sale of Caesars Harrah’s Hoosier Park Racing & Casino, Horseshoe Hammond Casino, Caesars Southern Indiana Casino and Indiana Grand Racing & Casino in Indian as per regulatory request and concerns from market competitiveness authorities.

The US Federal Trade Commission gave a go-ahead for the merger back in May, and finally, the deal is a reality.

If given a choice, consumers in the United States will always choose a legitimate gambling operator, or so the American Gaming Association (AGA) suggests analyzing consumer behavior in 2019.

According to the association, some 74% of all respondents said that if given a choice, they would always opt for the legitimate and licensed operators. However, some 55% of all consumers placed a bet with unlicensed operators in 2019, although there has been a 25% drop in the number of consumers playing at offshore websites, the report revealed.

The main reason why consumer shave opted for legal operators was the level of trust established between players and such websites.

Licensed operators were more trusted when it came to paying out and honoring owed amounts whereas some feared that unlicensed websites may choose not to honor a particular payout if it’s too detrimental to the company’s liquidity.

AGA chief executive Bill Miller argued that to move forward and completely surpass the illegal gambling market, licensed operators and lawmakers will have to agree on mobile wagering solutions and give more competitive lines and fixtures closer to home.

Las Vegas Sands, the company owned by Sheldon Adelson, has been one of the hardest affected during the COVID-19 outbreak in Q1. Some of this was due LVS’ decision to keep paying workers even though the land-based properties of the companies had stopped working and there had been no visitors whatsoever.

To make matters worse, Las Vegas Sands suffered both in China and in the United States. When the coronavirus hit, one of the world’s largest and best hotel and casino, The Venetian Macau, was forced to shut down operations, with revenue falling 80.4% to $343 million.

Yet, these threatening results didn’t stop Adelson, a man who has been designated a public enemy to online gambling, to continue supporting staff members. Here’s what Adelson had to say:

“I am pleased to say that the early stages of the recovery process from the Covid-19 pandemic in each of our markets is now underway. Our greatest priority during this period of the recovery remains our deep commitment to supporting our team members and to helping those in need in each of our local communities of Macau, Singapore and Las Vegas.”

The Las Vegas Strip is in the doldrum. Even though most casinos opened in June, visitors haven’t returned, and not least because Nevada is once again a hotbed for coronavirus infections.

It’s in this difficult context, the Circus Circus Hotel & Casino and Tropicana Las Vegas have notified the Nevada Department of Employment, Training and Rehabilitation that they are laying off 252 and 620 employees respectively.

These layoffs will happen between now and October, with the companies trying to secure their workers and offer alternatives where possible. The increase of COVID-19 cases, however, has made it difficult to cope.

Tropicana Las Vegas confirmed that from October 15, the 620 employees it reported to the Department of Employment will be laid off permanently. With no end of the outbreak in sight and casino and hotels forced to operate at reduced capacity, the companies have had to make difficult decisions.

Breaking into new markets is every company’s ultimately objective. For Tipico, this is possible through a partnership with Scientific Games for the United States.

The company will first enter the New Jersey iGaming market, bringing its quality products to the fore. Thanks to Scientific Games’ OpenGaming platform, Tipico will be able to provide gamers with estimated 2,000 games that will be readily available to anyone in the Garden State.

Scientific Games is similarly excited to welcome Tipico in the United States, where the platform can offer the same quality experience it has been offering in Europe for the past 15 years.

Adrian Vella, managing director for Tipico in the United States, has expressed his excitement to be teaming up with Scientific Games and to be making this important first step in a new market. The United States is poised to explode in terms of iGaming opportunities, and any brand that establishes a footprint now will benefit immensely.