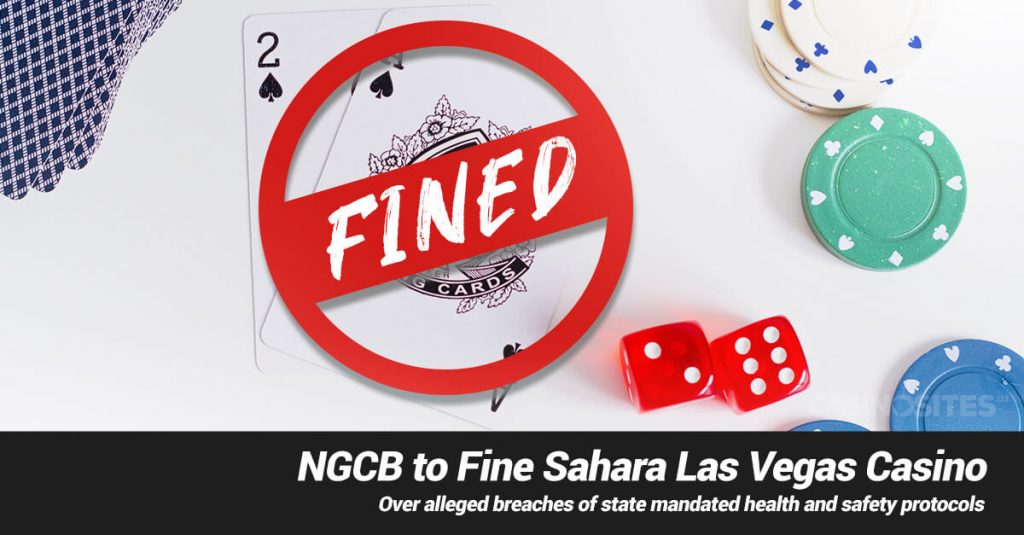 The Nevada Gaming Control Board (NGCB) will seek to impose a fine on the Sahara Las Vegas Casino for four alleged breaches of state-mandated health and safety protocols. According to the NGCB, the Sahara Las Vegas has failed to comply with recommendations about patrons and staff safety allowing non-playing patrons to stay at tables and around slot machines and watch other patrons play.

As per the state protocols, any player who is not participating in a game shouldn’t stay next to a gaming station or table as to minimize the risk of COVID-19 infection. The board reported four separate instances where patrons at the Sahara Las Vegas Casino didn’t comply.

According to the board, the Sahara Las Vegas Casino hasn’t acted on time in breaking up congregations of players. While the violations are a fact, the nature of the violation is not entirely clear. The board said that on one instance a bystander was standing between two blackjack players at a table and not participating.

On another occasion, a slot player was surrounded by several other patrons. The board said that it had notified the casino manager who acted swiftly to disperse the crowds. No specific amount has been named in the reported fine, although to issue a fine, the board will first have to take the matter up in court.

If found in non-compliance, the Sahara Las Vegas Casino may pay $100,000 for first offense and $250,000 for subsequent offenses. The board is already investigation over 156 cases of reported non-compliance with the health and safety measures.

Playtech is expanding with a new content deal in New Jersey, launching a new online casino under the Bet365’s banner. Bet365 will add a range of time-tested and proven Playtech casino games, including White King, Frankie Dettori’s Magic Seven, and Great Blue. The partnership marks a first step for Playtech into the United States, which is shaping up as one of the fastest developing markets globally for online gaming solutions.

Playtech originally gained a license from the New Jersey Division of Gaming Enforcement (NJDGE) in June and Bet365 has operated in the Garden State since 2019, making it one of the earliest entries and operating in partnership with Hard Rock Atlantic City, a brick-and-mortar gaming venue in the state.

Shimon Akad, Playtech’s chief executive for the United States, said that the partnership constituted a significant moment for the company in the country. Entering the jurisdiction is an essential step to Playtech’s further expansion.

Caesars Entertainment Inc. is staring at a $1.17bn net loss for the first half-year in 2020. The company just finalized the merger between Caesars Entertainment Corporation and Eldorado Resorts worth $17.3 billion and creating a new global gaming behemoth with over 55 casino properties scattered across the world.

Based on the filing to the US Securities and Exchange Commission (SEC) dated June 30, revenue has shrunk to $2.79 billion or over 50% from $5.61 billion previously. EBITDA was also down 82.7% year-over-year to just $266 million from previously $1.54 billion.

Commenting on these developments, Caesars chief executive Tony Reeg argued that merging the Caesars and Eldorado businesses has been the right move ahead for both companies and that the deal would allow businesses to recover quickly.

“Now that the merger has closed, our operating teams are fully engaged with integrating the two companies and executing on the synergy plans.”

Reeg reaffirmed the company’s commitment to upholding health and safety standards across the entire fleet of casinos, as properties prepare to reopen or are already in exploitation.

According to Twin River, the purchase of Bally’s and the addition of PointsBet online casino will give the company the opportunity to transform its business model and expand into online gaming.  Here is what Twin River CEO George Papanier had to add:

“We are also extremely excited to have the opportunity to participate in the best-in-class mobile gaming environment that New Jersey has created and that we believe will bring new and innovative offerings to the market.”

In the wake of the biggest country lockdown the United States remembers, different states have been enacting different measures to counteract a flare-up of another wave of COVID-19 infections. Businesses have been shuttered and suspended for 80 days across most of the country.

With non-essential businesses reopening today, however, there is a lot to consider. Casinos have been banning dining options, as well as drinking. Face masks have become mandatory and so have temperature checks of anyone entering the casino.

Now, some casinos in Oklahoma are opting out of smoking on the casino floor, another gambling-adjacent vice that many patrons indulge. The Comanche and Cherokee casinos have been the first to suspend smoking on their casino floors, a restriction expanding to vaping and other tobacco products as well. According to the American Lung Association in Oklahoma advocacy director Charlie Gagen, the measure made a lot of sense:

“This policy will protect the health of workers and customers from dangerous secondhand smoke and e-cigarette emissions, and we call for the permanent adoption of this policy.”

Oklahoma’s casinos decision has been adequate, but the state as a whole may have fallen a little behind others already. New Jersey has already suspended smoking on casino floors by order of the governor and at the recommendation of health authorities in the Garden State.

Nevada has been discussing a similar ban, although no restrictive measure has been introduced as of now. However, Gov. Steve Sisolak has sent a clear signal that should anything threaten patrons, residents or members of the staff, he wouldn’t hesitate to put the Silver State on lockdown once again.