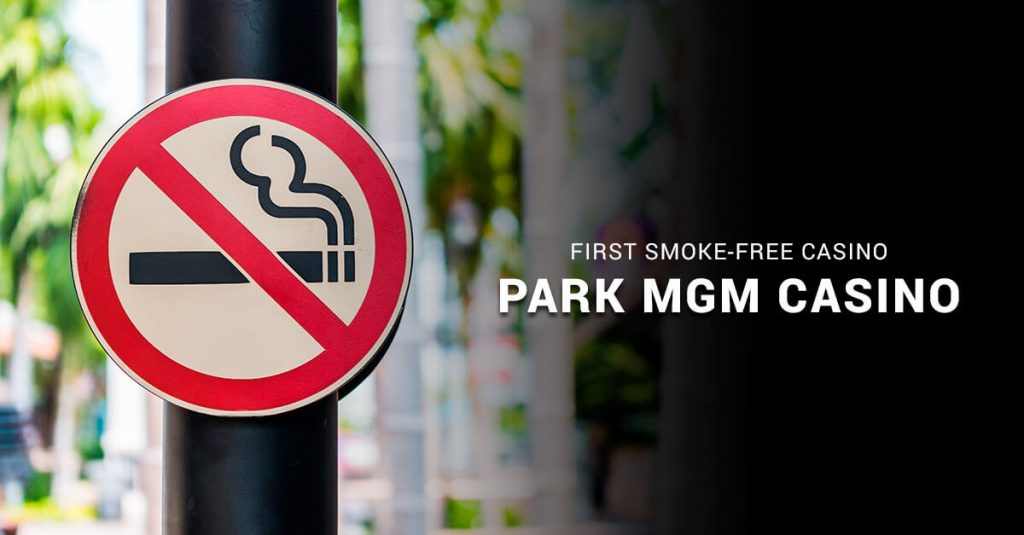 The COVID-19 lockdown has sent the casino industry into action and looking for ways to enhance health and safety measures on the casino floor. Smoking has been cited as one of the risk factors that helps spread the novel coronavirus.

While casinos have had a hard time whether to suspend smoking on the casino floor, Park MGM and NoMad Las Vegas, which will reopen at the end of September, have decided to go completely smoke-free.

MGM Park is leading the way in becoming the first entirely smoke-free casino on The Las Vegas Strip, an ambitious move that many will use to compare if the measure would affect their bottom line.

When MGM Resorts reopened properties during the first wave of loosening up business restrictions, rumors were already swirling that the property would most likely seek to limit smoking. Now we have a confirmation, as the resort’s website on Monday posted a new message on its homepage that read: “Let’s Clear the Air: Park MGM is smoke-free.”

Bill Hornbuckle, MGM Resorts CEO, said that he didn’t see the move as a gamble. In fact, Hornbuckle was optimistic about the idea and said it would be an important stepping-stone on the road to recovery post the COVID-19 pandemic.

The Detroit MotorCity Casino has backtracked on plans to reopen its popular poker room. MotorCity launched a short email campaign notifying customers that poker is coming back to the casino “soon,” citing this week as the most likely date.

However, these plans have been scuppered with the Michigan Gaming Control Board not giving a formal go-ahead on the move, forcing the casino to renege on its promise. MotorCity casino president Bruce Dall posted a new statement on Tuesday this week explaining the station:

“We continue to work with the Michigan Gaming Control Board (MGCB) and look forward to welcoming back our poker players when we are able to do so.”

MotorCity had to remove a Facebook advertisement promoting the event and the statement clarified that no date has been set for the reopening. Meanwhile, Greektown Casino spokesperson said that the company was planning to restart poker operations soon.

MGM Grand Detroit, the third casino in the city, said that it had no particular plans to rush with poker. All three casinos shuttered their operations in mid-March joining all other commercial casinos in the United States.

They were allowed to reopen in August at limited 15% capacity. Hundreds of slots have been shut-down to make sure that social distance protocols are kept. Poker remains as popular as ever in Detroit, and all three casinos are planning on expanding their card rooms on top of already effected expansions.

Over a year ago, Stones Gambling Hall was embroiled in one of the most vocal cheating poker scandals involving Mike Postle, a poker professional who attracted some controversy because of his play style, which many attributed to cheating whereas Postle stipulated that he had continued to defeat his opponents based on skill alone.

Specifically, the Stones Gambling Hall’s name is now out after a settlement was reached between the defendants in the case and Maurice “Mac” VerStandig, a lawyer who specializes in poker cases.

The settlement details were not released to the public, but VerStandig said that it was an “amicable settlement they were happy to enter into,” citing the over 90 plaintiffs he was representing.

According to sources, Stones Gambling Hall paid the plaintiffs, but the amount was a “nominal sum,” and was solely intended as a show of good will.

This means that both Stone Gambling Hall and Justin Kuraitis, the live poker manager, have been officially acquitted, albeit Richard Pachter, who is Kuraitis’ lawyer, said the settlement was not a complete vindication. VerStandig provided a peculiar statement about how the case was settled:

“After reviewing evidence with the cooperation of Stones, my co-counsel and I have found no evidence supporting the plaintiffs’ claims against Stones, Stones Live Poker, or Justin Kuraitis.”

The case’s settlement is unexpected, but ends a 12-month saga. Any plaintiff who doesn’t agree with the settlement, some 60 have agreed as per VerStandig, may file an amended complaint by October 1. An extension period may be allowed.

Casino boss Sheldon Adelson may invest up to $50 million in President Donald Trump’s reelection campaign, CNBC has reported. Adelson is “plotting” to put down between $20 million and $50 million in the pro-Trump super PAC, Preserve America.

Adelson was instrumental in the creation of Preserve America and he has been close to President Trump since at least 2016. Historically, Adelson is one of the biggest donors the Republican Party has had.

Most of the money Adelson is expected to pledge will be distributed to several organizations and individuals, CNBC explained. The media outlet cited the Republican National Committee, the Trump Campaign and Republicans in Congress as the most likely beneficiaries.

Adelson has already contacted GOP representatives, the story argued, to ask how to best allocate the money so it has the best impact.

The Big Ten Is Restarting Football on October 24

After cancelling their regular season in August, The Big Ten Conference is actually back. The schools have come together and decided that they have what is necessary to carry out enhanced testing and ensure the safety of athletes, students, and coaching staff.

The teams will have to fit eight games into an eight-week competitive season as well as find time for two cross-divisional games. The Big Ten Council of Presidents and Chancellors (COP/C) has voted unanimously in favor of restoring the season back to normal.

Testing before practice and games will be carried out. Any team that posts 5% rate of infection will have to sit out of the competition for at least seven days. Restarting the collegiate football season will bring more sports betting opportunities and see casino’s sportsbooks handle grow over the next months.