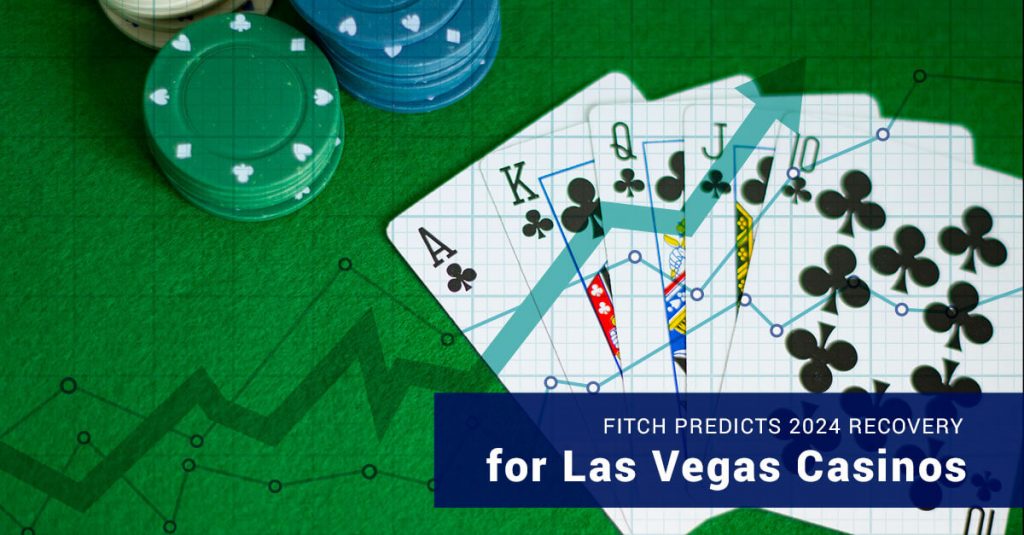 Fitch Ratings Service has predicted a lengthy road to recovery for Las Vegas casinos. While many jurisdictions have been recovering fairly quickly, Las Vegas seems to be struggling to fill up its 150,000 hotel rooms and bring back faithful casino players and business travelers who are not too reluctant to return, but local regulations may be making this difficult.

As a result, Fitch predicts that the most likely date to see Las Vegas casinos’ stock recover is 2024. A similar opinion is shared by Wynn Resorts CEO Matt Maddox, who has recently argued that the road to recovery will be a long one, not specifying any time-frames.

“The Las Vegas Strip will experience the slowest recovery relative to other major gaming markets and segments globally,”

Fitch warned, which has not stopped MGM Resorts to seek a new $750 million debt earlier this week.

While casinos may be affected on a gaming level, the larger impact will be on convention business, with resorts now left with spacious properties and meeting spaces now falling in disrepair and probably not seeing too much in the way of occupancy at all for the next year or so.

Some properties have been able to post good results. However, with Fitch citing their lower reliance on fly-in visitations and Nevada attracting drivers to the casino floors and leisurely activities. In fact, not even the spate of violence and riots in Las Vegas has been able to turn away tourists as was feared before.

The week started slowly with the Casino Control Commission in Atlantic City canceling its scheduled October meeting and pushing back the date for November 18 instead. The decision has impacted the sale of Bally’s Atlantic City, which is still subject to regulatory approval.

Caesars Entertainment Inc. is and VICI Properties are in the process of finalizing the sale of Bally’s to Twin River Worldwide Holdings for the sum total of $25 million. For the deal to continue, though, the commission must meet and approve the move.

While New York has given tentative approval for the reopening of its casino industry, results haven’t been too buoyant due to occupancy limits and lower consumer turnover in general.

General Manager of Rivers Casino, Justin Moore, argued that sports betting, for example, was registering better results before the pandemic, which is not surprising.

More importantly, though, Rivers Casino has been able to reinstate 65% of its workforce, which had to be put on furlough when the pandemic began.

Weekdays, however, have been empty, Moore said, adding that weekends were when most of the action in the casino transpired. According to New York State Gaming Commission, Rivers Casino’s gross gaming revenue this year so far is $9,508,297.

Encore at Wynn Las Vegas is undertaking more operational restructuring on its casino floor after announcing reduced opening hours kicking in on Monday, October 19. The property will operate a five-day and four-night schedule, and it will stick to it until the demand for Las Vegas has climbed up.

Hotel guests may start coming in on Thursday at 2 pm onward next week, but they would have to check out by Monday noon. Meanwhile, Encore’s poker room has been relocated to Wynn Las Vegas, and it is also reopening on October 19.

Encore will also stick to its other amenities and run them at full bore, with the move extending to restaurants and other businesses.

MGM Resorts International finalized a new debt offering on Tuesday, looking to raise an estimated $750 million and demonstrate confidence in the company’s outlook.

The company has so far amassed a sizable chunk of debt, up to $11.4 billion as of June 2020. The new debt’s maturity date would be set for 2028, giving the company enough time to cover it.

MGM believes that the debt would allow it to successfully execute upsizing offers and underpin the financial stability of the company. MGM Resorts CFO Corey Sanders has said that the new funding round is an extension of investors’ confidence in the company’s prospects.

MGM is also a partner with GVC Holdings in U.S. sports betting operation BetMGM and plans on entering at least 20 states in the United States by the end of 2021.

Cache Creek Casino Resort in Northern California has finally reopened doors after a 3-week closure, during which hackers reportedly seized digital assets by the casino and demanded ransom.

Cache Creek has praised its team and partners on the occasion of the reopening and confirmed that the property might finally reopen and return back to normal. As a reminder, Cache Creek had to execute a quick shut down on September 20 due to what was described as a “systems infrastructure failure.”

The casino industry has been squeeze just like any other business during the pandemic, and now, in Springfield, Massachusetts, city officials are looking to collect what they claim is $2.3 million in owed payments by the MGM casino.

The payment dates back to April and had to be delayed due to the Covid-19 outbreak, putting significant pressure on the city and casino’s finances both. Mayor Domenic J. Sarno has reminded MGM that while the city is patient, the contractual payment would have to be met in full.

Commenting on the achievement, the man said that it was “surreal” to have hit that jackpot and said that he would use the money to support his family and save some money for his children. The instant millionaire is now looking at a holiday with his family.