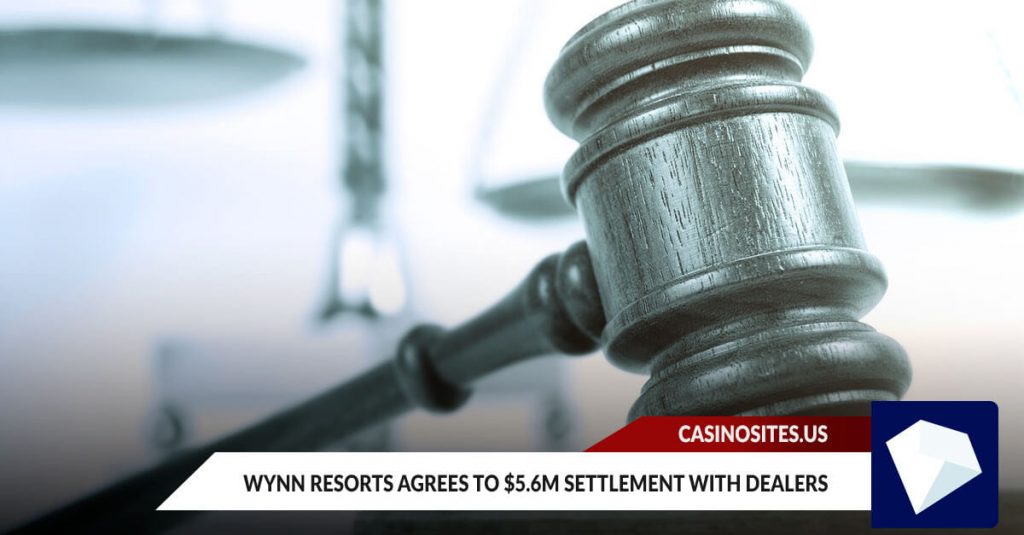 Wynn Resorts Ltd. has agreed to pay $5.6 million to 1,000 current, and former dealers who have been working at Wynn Las Vegas and Encore, court documents seen by the Las Vegas Review-Journal have revealed.

Based on a ruling signed by US District Judge Andrew Gordon,:

Surprisingly, the case doesn’t pertain to the pandemic, but rather to a practice introduced by former CEO Steve Wynn whereby dealers had to share tips with their table supervisors.

A Wynn dealer said that they must have lost at least $100,000 since the policy was introduced 15 years ago, stacking up to some significant losses for employees on individual levels. A spokesperson for Wynn Resorts, though, was confident that the case is now behind the company.

“We are pleased that all of the parties worked cooperatively to reach a resolution and bring this matter to an amicable conclusion,”

Wynn Las Vegas has been one of the most successful properties in Las Vegas, drawing throngs of gamblers who have not shied from the generous tip. Yet, dealers have been squeezed by the policy and lack of salary actualization.

It wasn’t until Matt Maddox, the company’s present CEO stepped in that dealers got their first pay rise amounting to $2 an hour, or $4,000 a year. This has been the first time in ten years that salaries were raised.

The original story dates back to 2013 and 2018, when dealers came together and said that supervisors are precisely that, but the company rebutted that, arguing that supervisors were just team leaders.

The cases sought to recoup as much as $50 million loss in tips by the dealers, but the final settlement reached $5.6 million, a far cry from the sought amount but a testament to the collective bargaining power of employees.

The settlement would mean that dealers would get around $4,170 each across 1,000 present and former company employees.

In the period preceding the official legalization of casino gambling in the state, many critics argued that allowing the activity would increase crime and have serious societal consequences.

Now, a report issued and presented by the Massachusetts Gaming Commission (MGC) is here to offer a strong rebuttal to what appears to be a frivolous claim. “Only a few crimes increased in surrounding agencies during this period,” the report argued.

The regulator further explained that there was very little definitive proof to establish a connection between a casino’s existence and ensuing criminal activity. The report argued that there were very few trends to clearly signal that any increases or decreases in criminal activities were related to MGM Springfield.

There were some trends, such as a known offender being arrested in the property, but the report was adamant that those had no special or logical connection. Overall, the original claims put forward by critics, such as higher burglary rate in Springfield’s Metro Area and more, were largely rebutted.

A new report seen by WRAL Investigates highlights North Carolina’s untapped potential when it comes to expanding gambling operations in the state.

The North Carolina Education Lottery commissioned the report, and it was originally only focused on sports gambling, but as the analysis was put together, authors sought to include other opportunities for gambling expansion, such as casinos, video poker, internet casinos, horse racing, and internet lottery.

If the surmises of the report are correct, North Carolina may be missing out on a small fortune right now. Based on the report’s findings, the state could generate $2.2 billion in revenue from casinos, another $2.5 billion from video poker, $367 million in sports betting, and $300 million from Internet casinos, along with another $15 million from horse race betting, all within five years.

This makes the total amount North Carolina is potentially sitting on top of close to $6 billion in revenue in just five years, although this is not the taxable amount, which should be mentioned here. Presently, North Carolina runs a very limited gambling industry almost monopolized by the Cherokees who run two casinos.

Despite the high numbers, proponents of gambling expansions are fully aware that North Carolina’s stakeholders will mount strong opposition against any expansion and try to preserve the status quo.

This is not surprising as gambling is an important source of revenue to the Cherokees, and their reaction in light of anything that might threaten this revenue is understandable.

MGM International Resorts has appointed Jeff Mochal as SVP for Corporate Communications, replacing Ayesha Molino, who will now leave the position. Mochal has extensive experience in and outside of gambling circles, and he already held a similar position for LPL Financial.

On the other hand, Molino will take care of MGM Resorts’ public affairs strategy and oversee the company’s corporate communications and government affairs programs. Speaking on the occasion of Mochal’s appointment, Molino had this to add:

“Jeff is joining the company at a crucial time. His skills and expertise will be invaluable as our industry recovers from the pandemic, and MGM Resorts seizes on rapidly growing opportunities in mobile gaming and executes on its goal to become the premier global omnichannel gaming, hospitality, and entertainment company.”

The full suite of agreed-upon games is expected to roll out on the PlayLive! website later in 2021 and be readily available to anyone who is of legal age and has registered an account with the casino.